Night is Short, Walk on Girl!

I must admit; when done right, I love me an all-in-one-night plot. The kind of narrative where we spend a day/night in the company of characters facing all manner of spontaneous oddness in their journey towards sunrise; so much so that I directed one.

Now that the whiff of that shameless plug has dissipated, my point is that it’s films like “Dazed & Confused”, “Superbad”, and the likes of “Go” that I’ll always have a soft spot for.
Masaaki Yuasa’s ambitious animation “The Night is Short, Walk on Girl!” is one such film and despite some reservations I was left with after the credits had rolled, it was hard not to be charmed by much of what it had to offer.

Based on the book of same name by Tomihiko Morimi; “The Night is Short…” is at heart, a romantic comedy. It tells the story of Senpai (Gen Hoshino); a hapless romantic determined to win the affections of the woman he affectionately calls, “The Girl With The Black Hair”.

Look; I never said he was an imaginative romantic, okay? 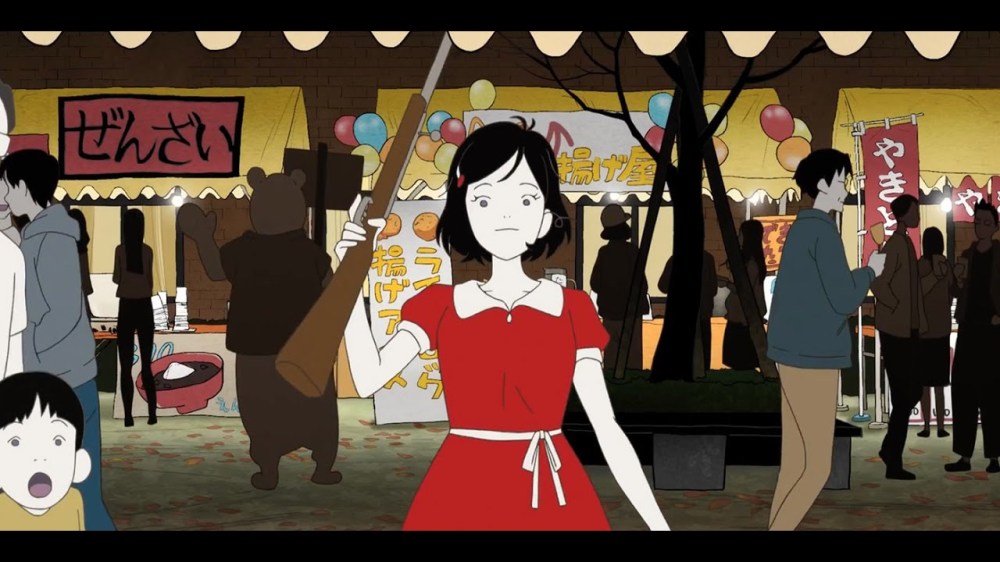 Senpai has been orchestrating countless chance meetings with her in order to always be on her mind; like a part of her day that she can’t go without. The problem he faces is that despite his endless “accidental” encounters with her, she remains oblivious to distractions, let alone affections; well that and the fact he’s too shy to just ask her out.

But then if he just did that, the film itself, let alone the night, would be short. Ahem.

But this is the night. The night young Senpai woos the woman of his dreams and in the most romantic gesture he can knock together. All the while, The Girl is on a mission of her own; to keep drinking, going with the flow, and not letting a single moment of her evening go to waste.
Along the way they both cross paths with a gaggle of eccentric characters including old men with porn addictions, guerrilla theatre troupes, and strangest of all (possibly), A God of an Old Book market that takes the shape of an energetic young boy. As you can likely guess, this film has a lot of characters, some of which leave a bigger impression than others.

One of the standouts for me was The Girl With The Black Hair herself. From the off it’s made abundantly clear that this isn’t a woman that needs saving. That much is clear from the “friendly punch” learned from her mother. She isn’t the manic pixie dream girl that Senpai perhaps sees her as. This is a character that is sure of herself and confident in going with where ever the flow of her evening takes her. It’s a refreshing aspect of the film that stood out to me; a character that people struggle to keep up with, yet can’t resist being swept up by her lust for life.
That being said, it can be tough keeping up with her as an audience member upon a first viewing. Just as you get used to one set of characters, the film launches you into the next happenstance. Put it this way she flits between locations and interesting set pieces faster than I can drop a tenuous analogy. However, a second viewing left me able to sit back more and go along with the ride.

One particular set piece that was a favourite of mine involved Senpai competing in a spice challenge for the honour of winning The Girl’s prized childhood book. It’s moments like this that are peppered (excuse the pun) throughout and really grab your attention.
However, I did have my gripes. There were times where the film dipped its toes into murkier territory. Along his way to catching up with The Girl to profess his feelings, there is a questionable sub-plot involving an organisation (that a friend of his is part) providing the deepest secrets to him about her. This information is of course used to give him an un-organic edge in fabricating a connection from her. It’s not dwelled on too much and doesn’t negatively affect him so it left a weird taste in my mouth.

Despite this, it’s difficult not to sit up and get engrossed with it all. I found this true from the off when I had my eyes slapped by the curious visuals. It’s strange in that it struck me as simultaneously detailed and simplistic. Yuasa utilises a vibrant colour palette and style for the film and is never afraid to push the boundaries of the surreal in order to portray the point of a scene. I won’t spoil it too much but a third act scene involving cowboys was trippy to the nth degree and showcases why animation was the perfect route for this. It’s just all so well packaged, and was complemented by a superb soundtrack that gave the film a European flavour. In fact, the film I felt tonally connected to when watching this was Jean-Pierre Jeunet’s “Amélie”. It’s a clash of cultural styling that I wasn’t expecting but very much enjoyed.

I’ll leave it unsaid whether ours leads finally get to meet and how it all goes down but it’s fair to say that this is a film that goes for gold, and although it doesn’t quite get there, it’s an oft beautiful spectacle. Beneath it’s beautifully presented exterior, there lies a theme throughout of fate and time. The films recurring motif of the old versus the young intrigued me to no end. The older characters in the film are often looking back to their younger days; or trying to hold on to them the best they can.
This might all sound like the most serious and deep affair but “The Night is Long” doesn’t neglect silliness and fun. It’s like a good night out in that way. At times it’s funnier than you would think, and deep when you least suspect it. Like all good nights out this is a film that might feel like a blur the morning after but you’ll find your noggin drifting back to it long after and you know that when that happens, it’s never long before you revisit it.

I do love to drop a tenuous analogy.

Night Is Short – Walk On Girl is In Cinemas Wednesday 4th October from Anime Ltd and National Amusements!